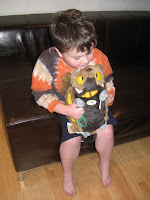 Leo had such a busy, fun, indulgent, and productive birthday that he asked to go to bed right on time. We even had him declaring that he was nine- rather than eight-years-old by day's end. But before that...

Seymour and I woke him up and presented him with his new Catbus! He was not as immediately overjoyed as I'd hoped, mostly because he didn't want to wake up. But once he realized what we were shoving at him, he was pleased.

Every seat had a cute little butt in it during carpool this morning, which meant that six people sang Leo Happy Birthday while we made the morning drop off rounds. Our cabin music also featured happy birthday songs, by The Jimmies, The Candy Band, and Justin Roberts.

After Leo and I returned home and he got on his bus, I worked for a bit then awaited the behavioralist sent by the regional center. Leo's regional center case worker was pleased by the reduction in Leo's aggressive behaviors since last year, but since his remaining behaviors are still dangerous when they do happen, she offered us a few hours of in-home behavioralist consultation. Supervisor M works at Leo's school almost exclusively, and supervisor E works on his home program rather than doing QA as she used to, so I figured a good pair of QA-like eyeballs might be helpful. Let's hope the regional center reviews the behavioralist's intial report on Leo and grants those hours to us.

Then I scurried off to Leo's school with his sad looking but tasty cake. Before I could make it to his classroom, both his teacher and Supervisor M asked me to walk down the hall and meet with the county director to talk about transitioning Leo to an integrated site. Which I did. We talked for a while, and I think we're going to move him -- ideally, when the new year arrives, Leo will spend one day per week in an autism classroom on a typical elementary campus, where he will get to mingle with neurotypical peers under the watchful eyes of one of the best teachers in the county (and an aide who knows him, of course). If the class works for him, he will transfer fully for fourth grade. The best part: he will have two friends in the class, the children of two of my favorite people! 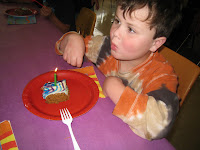 More scurrying after the meeting, to Leo's classroom. The class staff had covered the tables with festive purple paper, and Supervisor M was there! A huge treat. His teacher even had a candle for him to blow out -- something I'd left at home as I didn't think it would be allowed. Everyone sang Leo Happy Birthday to the best of their abilities and then he blew out the candle (with some assistance from inspired classmates). And Supervisor M got him a solar-powered remote controlled car! How very cool.

Afterwards, I skulked into the neighborhood Starbucks to caffeinate and finish off my work shift. I didn't really want to be there because I am disappointed with that company: I sent their customer support crew an email asking if would be possible to procure my Starbucks straws-obsessed son with autism a case of their straws as a birthday treat, and their bot-like answer was:


No, we don't sell our straws, and furthermore our supplier is confidential.


Seymour said they had a right to refuse and I understand -- but it seems like a missed opportunity to generate serious social media goodwill while delighting a challenged little boy who doesn't ask for much. I grumpily and defiantly grabbed a big bunch of the longer straws when I left.

Leo's birthday afternoon was about mellowness and watching Totoro while squealing and tossing around his new Catbus. And sometimes even offering it to his little sister while informing her, "It's Catbus!"

We picked up Indian food for dinner, as we'd promised. Leo not only sat patiently and non-violently in the regular non-five-point-harness booster seat next to Mali the entire way there and back, but he accepted that he had to wait until we got home to eat his naan bread. No hitting, no complaining, no whining. Whoa.

We still had to portion out his naan when we got home -- if he ever does learn to reasonably self-regulate his eating, naan will be the final non-bolting test item.

He asked to go to bed, as I mentioned. He also asked me to play him some tunes on the penny whistle, as has become part of our bedtime routine. Many of the songs he loves fit within that seven-note range -- including the Totoro theme song (mostly), Good Night by Laurie Berkner, This Little Light of Mine, and, as we discovered tonight, the Justin Roberts version of Happy Birthday. Afterward, and after only fifteen minutes of giggling in bed, he slid into sleep.