Here, There, and Every Which Where

When every day brings five or ten legitimately bloggable incidents, it's challenging to find time for that blogging, not without carving into my already dwindling sleep allotment. Which is the kind of health-averse action I swore, in public, on BlogHer, to start curtailing. So I'll start tomorrow. Right?

Here's what's been going on since the last post on this site:

I want to thank everyone who took the time to comment on my post about how damn hard Leo works when he's in public. Your momentum got the post syndicated on BlogHer! Good work, you.

My essay for The Thinking Person's Guide to Autism on Why My Child With Autism Is Fully Vaccinated elicited some excellent discussions, and was picked up and republished by the Shot of Prevention blog -- where the first commenter has already provided a beautiful example of the "I don't believe your facts, therefore I'm entitled to debate you" mindset. Um, no. Antivaxxers, you need to tighten up your sloppy critical thinking skills if you're going to step into this ring.

As long as I'm writing about The Thinking Person's Guide: our team is still overwhelmed by all the great writing on critical autism topics. And we keep having to delay book publication, because what else is an editorial team to do when its last three submissions are from Susan Etlinger, Holly Robinson Peete, and Kyra Anderson? (Where's your essay, by the way?)

I was on TV last week, on Comcast Home Network's Upside news program, along with a super-knowledgeable SLP from Leo's school; Jen gently suggested that perhaps I could consider taking care of my two-inch roots before going on camera, so I went ahead and dyed my lid myself -- so quickly that my first proper view of the back was on a studio monitor. The video should be up soon, on http://www.facebook.com/UpsideNews.

And since we're chatting TV, Seymour and his crew spent last Friday covering the punch-through of the Devil's Slide bypass tunnel last Friday -- the first new tunnel CalTrans has built in 40 years! Punch through pictures are coming; in the meantime enjoy his team's mini-documentary on the project.

You may get the sense that we have many, many projects going on, and you'd be right. It's all overwhelming my poor partner. So while I was contemplating taking Leo to Disneyland for his 10th birthday like we did for Iz, we will push that off until the Spring, or later. I've heard the Mouse is quite accommodating for kids with autism, and think that Leo would have a great time if we plan carefully and go during a less-attended day. Can you even imagine? A happy Leo Disney day? He hasn't been since before Mali was born.

Two last-week Leo milestones that distracted me from All Done Disneyland:
Leo also managed to drop his iPod touch (not iPad!) in the toilet, insta-bricking it. Or so we thought -- until after 24 hours of drying out it spontaneously de-bricked! I had to restore it from backup and retransfer all the audio and video, but aside from a slightly listless battery, it has recovered completely. Whew. The iPad is wonderful, but it doesn't fit in my purse. 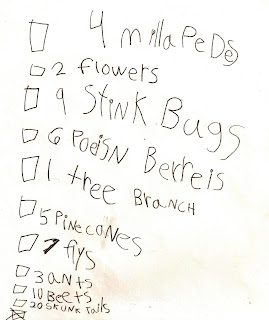 Iz managed her own aquatic device attack. Our printer is on the fritz, so she borrowed my thumb drive to take assignments to class, then forgot take said drive out of her pocket. Which none of us realized until the drive's components materialized in pieces, in the wash. But Seymour let them sit, dry out, reassembled them and -- boom! Another recovery. Here's proof: I used the reassembled drive to transfer a scan of Mali's latest potion recipe (left).

And since we're talking chemistry -- we love www.PeriodicVideos.com. It's like Mythbusters for the periodic table -- amusing and educational. It is very gratifying to hear the little children whine, "Mommy can we watch the video for Technetium please because it's the lightest naturally occurring radioactive element?" Though you folks are probably more interested in Mercury:

Iz's favorite school subject is life science, where at the moment they're studying cell biology. She keeps asking me to help come up with cell function analogies, but is starting to outpace me -- I don't have an analogy for endoplasmic reticulum, do you? Her teacher is slyly tailoring her material for her pubescent girl students; Iz has come home wide-eyed about the dangers of consuming too few calories, as her mitochondria need fuel to produce ATP. And she has to eat enough fat or her cell walls, which are composed of lipids, will collapse and she'll turn into a big puddle.

Iz has four teachers; Mali has two: One each for Spanish and English. I talk with both of Mali's teachers every single day after school, because our button-pusher is still seeing how far she can go with them, and as long as her defiant behavior persists, the teachers and I need team strategies. Part of Mali's challenge is being a very young first grader with a November birthday. Part of it is increased expectations -- first graders are expected to work harder than kindergartners, and she really liked the creative cruising along of kindergarten. Part of it is not being able to shift her great big personality into compliant classroom mode. But it's still early in the year, plus both teachers are experienced enough to wait her out and let her break herself in. For now.

Mali's an outspoken girl. And we're working on that, in helping her figure out the distinction between assertive and rude. It's a fine line to walk when one is five years old. An example: I took Mali, Iz, and their cousins Danielle & Elise to see one of their heroes, the irrepressible Jenni Holm (Baby Mouse) at a local book store. Jenni did a series of drawings for some of the kids in the audience. Mali of course answered every single question Jenni asked each kid whether directed at the audience or not. Bu when it was Mali's turn to step up to the easel, and another girl answered for her, Mali turned around, assumed the regal, snappy pose of a drag queen, and declared, "Excuse me, it's MY turn right now."

Which was not terribly polite! But she neither insulted the girl, nor did she tackle her or in any other way cause her physical harm -- actions which would have justified the reactions of all the perfect little parents of the perfect little children -- as a group, they gasped so loudly that I was surprised any oxygen was left in the room.  Different universe; I guess my context for bad behavior is a bit different than theirs must be.

I had Mali quietly apologize to the girl for being cross, but those parents? I met every single one of their eyes with a calm, firm detemined half-smile. And if I had deigned to talk with them, I would have told them that the best way to deal with kids like Mali is to ignore the behavior you don't like, and reinforce the behavior you do, and that their group gasp of horror was near-narcotic for our little attention seeker -- not helpful, uptight people. 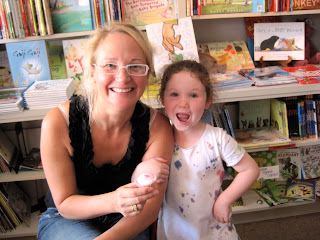 But she got to meet Jenni, as did we, which was worth the public stink eye. Jenni rocks.

What else? Mali wants more friends with geography names. Pregnant ladies, do you hear me? She wants you to name your babies Australia, New Zealand, or Pakistan.


Winding down ... um, I wrote another essay for BlogHer today, about how Iz likes crappy pop music and it pains me, and I'm not sure what to do but perhaps you could recommend a band or two?