Special needs penalty costs really bother me. Why should families pay $75 for a special sit-upon therapy ball when we can get the same damn type of ball (or sometimes, a better one) from Target's yoga or Pilates section for $29?

And now, I'm seeing this same penalty with special needs apps for iPads and other devices. Why are we so often asked to pay more for "special needs" apps than those with similar functionality, just because those apps are developed for special education or special needs -- especially when some don't have the top-notch interface or design to merit the extra costs? So I had plenty to say when a Mercury News reporter called me up last week as a source for the article Using touch screens and apps to treat autism. Here's one of my quotes:


"Right now it's kind of a Wild West in terms of app development," [Rosa] explained. "A lot of people who have experience with kids with special needs are putting out apps. They have great ideas and great content, but unfortunately they sometimes have clunky designs and clunky interfaces."

And that's true, but that's not the full story. Here's the comment I left, to clarify:


The special need professionals who develop apps have a wealth of talent and experience that traditional developers should tap, because they can repackage most apps for kids with special needs as early learning apps for typical kids. Then these apps could have top-notch UIs and design, and wouldn't need to have the special needs penalty costs attached to special needs apps due to developers anticipating a limited market share.

It's absolutely true. I'd love so see more developers enlist the speech therapists, occupational therapists, behaviorists, special ed teachers, and parents who are making such fantastic (if sometimes rough-around-the-edges) apps, and bring them into the fold. In an app development environment that  expects developers to produce new apps every six weeks, why not do what software producers have been doing for industry aeons -- take the special needs apps' chassis and content, rework them as "early learning" or "toddler" or whatever typical developmental age range is suitable, and release them for that market as well? You'll make more money! Then you can reduce the cost of the special needs apps, ideally.

Some of this collaboration is happening already. Dawn Ferrer and Luna DeCurtis, the SLPs (speech therapists) and innovators behind the language-encouraging app That's Silly attended the May 2011 Dust or Magic children's app development camp in Monterey, and found themselves surrounded by other developers who were fascinated not only by the two women's professional knowledge, by also by how they and the children in their practice use apps to learn and play. I hope those developers were able to incorporate that what they learned from Luna & Dawn into their next wave of apps. 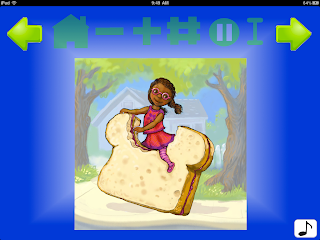 And not all special needs professionals-turned-developers need hand-holding. Dawn & Luna's app That's Silly ($.99) is an exemplary boundary-defying early learning app. Kids can play with it by themselves, choosing nonsensical scenes of various complexity levels to compare with the more typical version of the same scene (e.g., in the screenshot on the left, you can swap out the girl's sandwich for a bike). Parents can play with their kids, eliciting language. And the buttons at the top of the screen allow both parents and professionals to track kids' responses, if desired. It's simple, flexible, beautifully illustrated, and fun. I hope other app developers are taking notes. 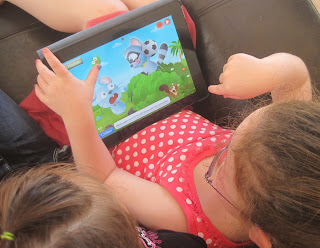 Another recommended, special needs-supporting but not special needs-specific SLP-developed app is Milo: Interactive Storybook ($1.99) from the Speech With Milo (www.speechwithmilo.com) series. From the app description:


Speech with Milo is focused on developing language skills in children. Created by the licensed Speech-Language Pathologist that brought you five other language apps, to build storytelling and narrative skills. The interactive story book allows children to build skills by telling the story on their own. You have the option of reading and listening to the words that we provide, or you may create your own story. You can turn off the narration and words to create your own story with no distractions.

So, again, here we have an app that succeeds because it is special needs professional-developed, rather than special needs-specific. My six-year-old, Mali (who could use more facility with suppressive rather than expressive language) thinks Milo: Interactive Storybook is fabulous because of its story, and because she likes playing with the interactive items on the screen and creating voiceovers.  Whereas her brother Leo, who has limited expressive language, likes the app because it includes recorded voiceover, so he can "read" himself the story.

Note that neither Milo: Interactive Storybook nor That's Silly costs more than two dollars. And with both apps, kids of varying needs can learn, and have fun.  Everybody wins.

This is how all apps should be.

Disclosure: I was given a promotional code for Milo: Interactive Storybook, but all opinions expressed in this space are my own. As always, I only write about the apps I think are worthwhile.
at July 25, 2011