Echoes of BlogHer '11 are still pinging around the Blogosphere three weeks later, as folks process the conversations and ensuing momentum -- so this tardy wrap-up is still somewhat timely. You can read a more coherent and streamlined version our our goings-on from my travel companion and roommate Jennyalice. Or, check out our other roommate SJ's pre-conference volley. (If this post seems disjointed, heh, imagine what it was like to actually be at the conference, actually experiencing everything below -- and I am not including half of what we did!)

We knew BlogHer11 was going to be a three-day learning and and socializing marathon from the get-go, so we started off easy on day one: I dragged Jen and my mom and girls (and my mom's dog) on the road at 5 AM, inveigled them into eating at my favorite childhood Mexican restaurant 400 miles south in gloriously dingy Anaheim for lunch, then dragged Jen to meet with the too-cool crew of Oceanhouse Media in their stunning new San Diego offices. (I love Oceanhouse -- they really take concerns of parents of kids with special needs seriously, which is just good business in general.) And then we dropped off my mom and the girls and dog at my mom's place, got gussied up, and hit the BlogHer conference for speaker training and the first round of parties!

Apparently, while we were having Mai Tais down at the bar with our beloved Laura Shumaker that first night, there was some sort of flash mobbery, which is honestly my one of worst social nightmares (actually, my worst social nightmare was the hot sweaty crowded Vans Warped tour Seymour took Iz to the next week, best dad ever). I am a perennially conflicted conference attendee due to perennial social awkwardness, so missing the flashing and the mobbing was OK with me. 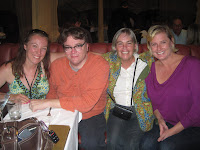 The rest of the conference was a syncopated blur. There were good dinners. With great people. Like Jen Lee Reeves and Robert Rummel-Hudson -- whose book Schuyler's Monster you should not just buy but read -- and Liz Ditz (including Laura and SJ, why are they not in this picture?).

We occasionally visited my very patient mom, and my girls -- whom SJ advised to consider granola bars "factory floor sweepings." (Fair enough.) SJ will also apparently be starting a band with Mali named Maelstrom Plum or something like that. It was fantastic getting to have breakfast with her and Jennyalice every damn morning, then there was the frosting of getting to bask in their reflected glow at the conference, because how damn phenomenal are they both? We need a wormhole between SF and Seattle. 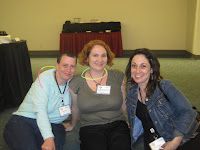 Back at the conference, the number of choices for any given hour overwhelmed. And we got to spend some quality time with other women we adore, including Tarrant and Jenijen (and why is Denise not in this picture?). This is just after Jenijen read us a beautiful piece of her writing. (She is a gorgeous writer.)

We did periodically swing through the whole Expo center where brands and companies promoted some stuff and gave away other stuff for free but not as much cool stuff as last year, IMHO (no PlayDoh perfume? *sob*). Though the freebies were often appreciated, for instance in the case of Pfizer, which was handing out Advil samples to the semi-ambulatory hangover crowd. And I was grateful for the ladybusiness stall handing out ladybusiness gear when my own ladybusiness suddenly decided to go for a fortnight cycle instead of its customary lunar. Serendipity! 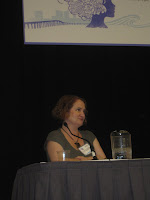 I was also a speaker, in the Special Needs (mostly) parenting minicon, along with moderator/organizer Julia Roberts, Robert R-H, and Aurelia Cotta. Here's the outline I'd planned, which was not exactly what I said, but hey:
I then poked my head into Denise's Patriarchy panel. Shannon LC Cate was there! It was the first time we'd met in person, though we'd been corresponding since 2003 -- the era of Emperor Joshua Norton and Plain Layne. What a delight.

My favorite panel, though, was Coming Out as Undocumented: The Children of Immigration, the Definition of American, which included Jose Antonio Vargas of Define American. The takeaway for me: everyone can make a difference, but it's hard, because as panelist Erica Holloway described, the process for undocumented residents to become legal residents is broken:


"What's wrong with [the] government is it sets up people like Jose to fail. Living as an illegal resident is easier than becoming a citizen."

Jose himself, on the complications of and lack of options for the undocumented [excerpted from the liveblog, which is a mostly but not entirely faithful record]:


"In the State of Alabama, [it's] even worse than Arizona, [being undocumented is] actually a crime. You can actually get fined or arrested for driving somebody who is undocumented or for living in the same house. You could have a family in which the wife is an American citizen born here, and has a kid born here as a naturalized U.S. Citizen thanks to the 14th Amendment. It's a mixed status family. Which in many ways tells you how mature and how long this problem has been. In many ways, my story is instructive because it represents how bad the problem really is. If there was a way for me to get in some sort of line, believe me I will be there with popcorn."

Jose's former high school principal Pat Hyland spoke adamantly about the need for those who, like her, find themselves in a position of privilege to own up to that privilege, and use it for good:


"I don't know if Jose wanted the conversation to turn this way, but the first time he came out to me was as being gay, which was such a stressful thing but he held the other secret [being undocumented] even longer. And if you think of the magnitude of those things, the fact he thought it was okay to tell this one story, but not okay to telling the other, just think about the gravity of that situation. Like so many educators, there's a kid in front of you and what are you going do? It's a kid that needs something and it doesn't matter what color they are, or what the situation is, you are there to care and you are there to help them be the best they can be." 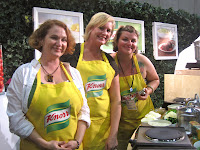 Afterward, there was culinary frolicking as we made Risotto with Marco Pierre White at the Knorr booth down in the Expo -- entirely SJ's idea. Sr. Procopster, who was supervising our antics via Twitter, didn't believe our good fortune at first. When we assured him that, yes indeed, we were going to be cooking with that Marco Pierre White, he turned peevish. Though he's since resumed talking with me. 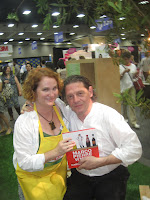 At first I was worried about taking orders from a legendary firebrand, but MPW was entirely gracious, pleasant, and professional. FYI. And oh my goodness was that Risotto delicious.

The entire time, though, I was wondering what the hell MPW was doing promoting Knorr stock at a women's blogging conference -- so I asked my chef BIL James his opinion when we visited him on our way home. After James finished giving me O RLY face, he launched into a detailed MPW bio, the conclusion of which was MPW does whatever the hell he wants, because he can.

And then we went to about five more parties with gyrating handsome dancers and sparkling unicorns and cheeseburgers. Where I finally to got to have a cherished conversation with parenting community powerhouse Ellen of Love That Max. (Yay!) And then our fiery burning BlogHer11 arc flamed out, we crashed, and I for one am still recovering.

Email ThisBlogThis!Share to TwitterShare to FacebookShare to Pinterest
Labels: BlogHer11