Every BlogHer11 day meant packing in months' worth of fun, geekery, learning, and camaraderie. Months' worth. It was like watching the TV show ER with my mom the emergency room nurse (the show's early years, before it sucked), asking if working in the ER was really like that, and having her respond that well, yes, mostly -- but over weeks and months, not in a single hour. My goal is to post my official conference wrap-up in two days, but until then here are some fine BlogHer11 geek pride moments. 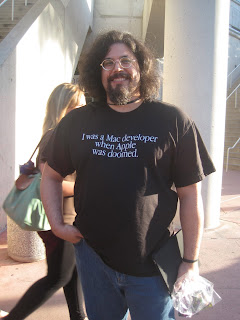 Best t-shirt of the entire conference, worn by Chris Page. If you can't read it, it proudly declares, "I was a Mac developer when Apple was doomed." 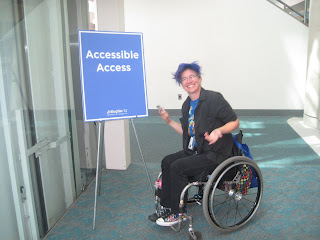 Liz Henry, highly amused by the elevator signage and its location. 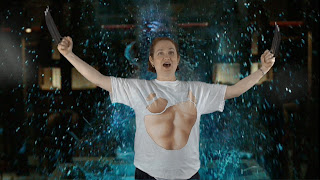 My official Wolverine photo! I was fierce at first, but at this point am about to giggle uncontrollably. Still, being Logan ruled. A conference highlight.

More BlogHer coming! It really was several months' worth of living in 2.5 days. Exhausting. Wonderful. Repeat those two words indefinitely and you'll capsulize my life.
at August 15, 2011