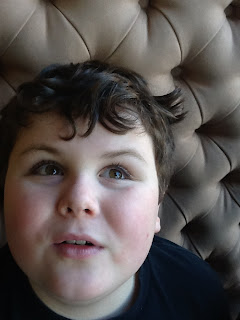 Do you know someone who is Autistic? Do you know that many people like my son either need extra time to process input, or work best processing one thing at a time -- like sound or visual input but not both simultaneously? This can be a challenge for outside-autism people to comprehend; it's also not one of the things we all talk about enough when we talk about autism, in my opinion.

Leo is a textbook kid when it comes to needing an extra beat or two. As he lives in the middle of a never-ending activity vortex, we have to be careful to make sure he gets the beats he needs.

Leo's processing needs combined with his not speaking much means folks frequently underestimate our boy, so please remember this if nothing else: he's not much of a talker, but he is absolutely a hearer and an understander.

When I talk to Leo, especially when I ask him a question, I don't always use the short crisp loud phrases he needed when he was little. Not unless he really doesn't hear me, or really doesn't understand me. Most of the time, I speak to him no differently than to his sisters, in asking things like "Leo, did you want to go with me to the store? Then you need to put on your shoes." Pause, process -- then he walks to the door and the shoes go on.

Sometimes, if there's an eye lock when we're talking, I can watch his cogs turn. (Probably because it takes longer to process when he's also actively looking at me.) But then: one moment, two -- he responds, and appropriately. He uses the detachable shower head to rinse his own hair, he goes upstairs and turns off the light he accidentally left on in his room.

And sometimes, processing isn't what's happening at all. He's been refusing to sit in his seat when gets on his bus, insisting on standing for about ten seconds first. After a few days of me and the driver both being slightly exasperated, Leo turned to the side while standing and I saw why he was balking -- he'd discovered the joy of using his breath to fog up a cold glass window, and then drawing patterns with his fingers. He discovered this all on his own. It was fun. And new. And once he was buckled in his seat, he couldn't reach the window. If he didn't fog up the window right when he got on the bus, he wouldn't get to do it at all.