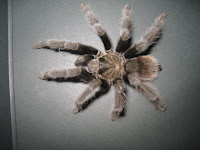 Here is the latest critter delivered by the cats, and which I found no less gruesome for being both alive and un-disemboweled unlike their usual rat/lizard/bird/bunny offerings.

I didn't realize we had tarantulas in Northern California, until Pat the Cat announced this one's appearance on the back porch just as our two babysitters arrived to spring me and Seymour for date night, and while I was finishing making the kids' dinners. 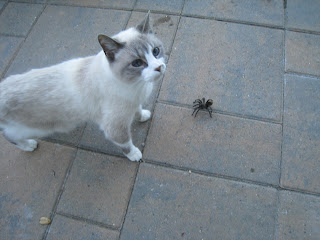 Amidst that melee, and spurred by the girls' squeals of delight and disgust (Mali: "I don't like arachDids!") I left off assembling Leo's PB+J sandwich, but that turned out to be no problem -- our boy demonstrated mastery of recently practiced skills, by finishing making his own damn sandwich, thank you very much Mommy who would rather take pictures of giant spiders than put the final touches on her son's dinner. The peanut butter was rather globby and the jam spotty, but it was a passable, edible effort. Go Leo!

If Seymour ever doubted my love for him, he can stop now. Because when I called to let him know about our eight-legged guest, his first reaction was to ask me to capture it so he could see it himself. Which I did. Which he appreciated.
at September 14, 2009