Our Iz is going to be twelve tomorrow. I'm not sure how we're even supposed to conceptualize that. 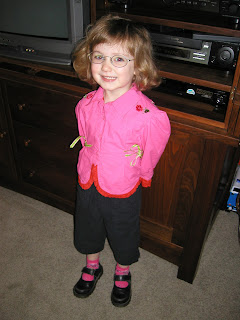 This is what she looked like the month before I started this blog. She was four and couldn't have been more scrumptious.
Here is what she looks like now, and if you can identify the mushroom she's holding, I'll send you its spore print: 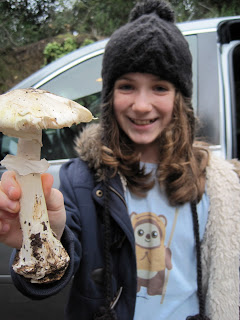 More than anything, more than a hair straightener or new Astonishing X-Men comic, she wanted her birthday to feature Maria's edible rainbow cupcakes. But I am lazy awful mom and didn't want to deal with a straightforward yet logistically complicated recipe, so I did something slightly evil. I suggested she ask her Godfather Michael, who has publicly expressed his disdain for cupcakes, if he would bake them with her. Her indulgent godfather said Yes! I cackled, and scheduled the party for today. 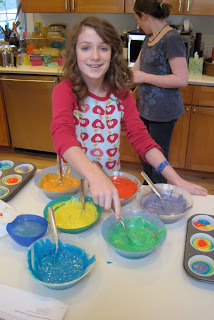 See how much fun she's having? Much more fun than if I had been in charge, grumpily barking out orders in reluctant Kitchen Commander mode. 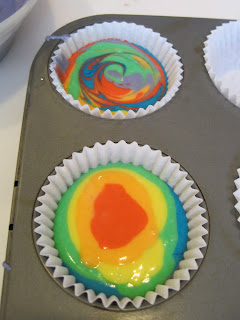 The girls and Michael did all sorts of batter layering and patterning experiments. 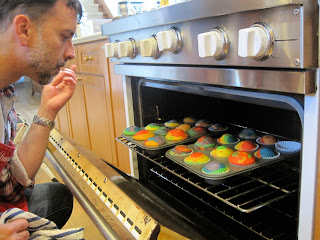 Michael may not like cupcakes, but once he gave his word, he was committed to excellence. Note look of professional concern. 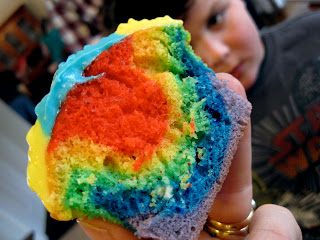 They were awesome! Michael, Iz, Mali, and Iz's friend Clarice made cream cheese frosting, because we're always looking for an excuse. If you ever hesitates on a frosting decision within earshot, you will get strong-armed into a cream cheese option. Consider yourself warned. 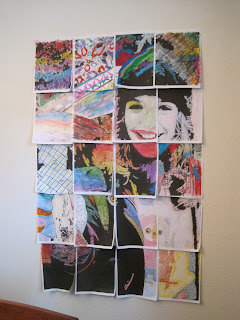 The final onsite party event was a collaborative mosaic. The kids were given individual panels to decorate however they liked -- panels that looked quite random individually. It wasn't until we put them together that everyone recognized the picture of Iz (the 'shroom pic from above). Iz and her friends got a real kick out of the whole process, which was a relief as I am all about the cheap homespun fun. I don't think they noticed they were having cheap homespun fun.
And then Jennyalice, Ep's husband Clyde, and I took Iz and ten friends to see the Green Hornet which was as witty and amusing as io9 promised but also remorselessly, thoughtlessly violent thought I might not be the best judge as shepherding those kids -- who are good, obedient kids but also top-volume human ping-pong balls -- brought me as close to a panic attack as I've been in years. But I would still do it all over again. Because Iz said it was a fantastic day. And that was the goal.
Happy birthday, amazing girl.
(And because I am her mom I have to crow that she won the middle school spelling bee and no she is not in the oldest grade in her school. And that her prize was a language course and she chose Latin. And that I think she's just great. Really great. Proud to be her mom on so many levels.)
at January 15, 2011