The Day Leo's Been Waiting for: Mr Brown Can Moo App Released! Ever since we discovered Oceanhouse Media's Dr. Seuss apps, Leo has been in heaven. Our boy was already a longtime Dr. Seuss devotee in several other media forms: books, audiobooks, and videos. The Dr. Seuss's ABC video we've had since before he born (and which he still watches obsessively) includes I Can Read With My Eyes Shut and Mr. Brown Can Moo, and cemented his preferred Dr. Seuss story ordering. In Leo's conception of reality, there can be no Dr. Seuss's ABC without the other two! It's been easy enough to provide a trio of books (though we've replaced more than a few), but the apps were trickier since, for so long, only two of the three existed, and Leo wasn't satisfied with my explanations why.

But, today, finally, to my relief and Leo's delight, Mr. Brown Can Moo! was released on iTunes. WOOOT!

Look how intensely our boy dove in: no laughing or even smiling -- only serious concentration and verification that the fabric of his reality is now complete:

Long as we're talking about Oceanhouse media books, let me tell you about three others Leo likes. They all share one feature that makes them ideal for our boy, and about which I've written several times: a "Read it to Myself" mode. In the early reader books like the Dr. Seuss titles, this means Leo can click on each word individually to "read" himself the book. Which he does enthusiastically, as you can see in the video above. 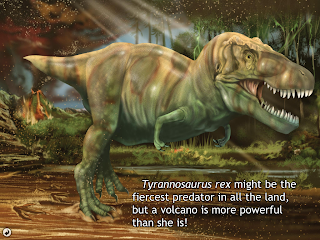 Books for older reader have different functionality -- in Read It Myself mode, tapping the text reads aloud entire paragraphs instead of individual words. Leo and Mali the dinosaur fan actually sit together to read and sometimes bicker over It's Tyrannosaurus Rex - Smithsonian's Prehistoric Pals. Mali's only complaint is that the book doesn't feature enough dinosaurs -- but then Dinosaur Train fans can be quite demanding. 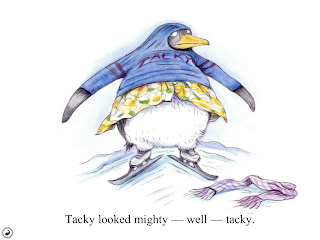 Have to admit, Leo likes Tacky the Penguin , another title for older readers, but I adore it -- clumsy, socially clueless but cheerful and enthusiastic Tacky finds himself in situations that may be familiar to those on -- or who love someone on -- the autism spectrum. This book might be a good resource for introducing the concept of autism to kids outside our community, or just talking about anyone who's a little different than the rest of a group. It's also a sweet and fun story, for those who don't mine every last children's book for teaching points.

If you've used any of these apps or read the books they are based on, do comment. If you've come across other books or apps you think Leo and his sisters may like, please let me know!

More apps reviews are coming during the next two days. I also have lots of app codes to give away, though I'll be doing so on Twitter -- follow me @shannonrosa to nab them.

Disclosure: Oceanhouse Media gifted Leo and his sisters the apps cited in this post, but if you've been reading this blog for any length of time you know I only write about things we genuinely like and use.
at May 03, 2011