Before I dive into telling you why Leo and his sisters (and I) like this batch of iPad apps, you really should read today's excellent Thinking Person's Guide to Autism post, Elaine Park's Motivation, Middle School, and iPad cool. Though Elaine's son Drew is on the opposite end of the autism spectrum from Leo, the iPad is a game changer for him and his peers, too. Elaine writes about the way Drew's inclusion specialist uses iPads to facilitate social opportunities:


For kids on the spectrum, being cool can be a rare experience, and Ms. Gold is capitalizing on this to help her students share social experiences with other students in their classes. She regularly holds a group that allows kids in the program to bring a classmate to play in the safety of her office during lunch recess. The chance to play on a coveted iPad makes this invitation rejection-proof and gives the hosting child a valuable opportunity to build a friendship with a peer.

Her post ends with a list of apps used by the middle school inclusion program, for those whose kids with autism are more like Drew. But for now, back to apps Leo likes! 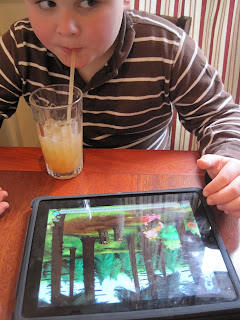 Interactive book apps are such gifts for kids like Leo. Though voiceover functionality and reading modes vary, they all allow pre-readers to, well, read books independently.

A winning recent book app release is Three Little Pigs - Nosy Crow Interactive Storybook ($7.99). It has three reading modes: Read and Play, Read to Me, and Read it Myself. The animation and interactivity are definitely more elaborate than most book apps I've seen -- which is a draw for Leo and his sisters but also puts the apps at a higher price point than its category-mates, so I asked the folks at Nosy Crow for some insight. They said:


We thought hard about the pricing of The Three Little Pigs app. We want to make the best possible apps that offer a really remarkable new kind of reading experience, and we don't think that you get that by reusing material that already exists. We commissioned our app from scratch -- lots of original artwork, animation, and music. We used the voices of six children and spent a lot of time in the recording studio. And, of course, we had to create the computer coding that means that the pigs somersault at a touch and the wolf blows down the houses and that every scene looks 3D. People have commented that the price is high, but often compared it to printed books. No one has said to us, or in any review, that it's not worth the money.

Though my kids aren't animation connoisseurs (as I didn't differentiate between golden era and contemporary Warner Bros. cartoons at their ages), I do spend a lot of time playing/reading book apps with my offspring, and I appreciate quality (as well as the cute British kids' voices). In my opinion, The high production standards and lushly textured animation of the Three Little Pigs make this a showcase app, like The Elements, for demonstrating what iPads can do. 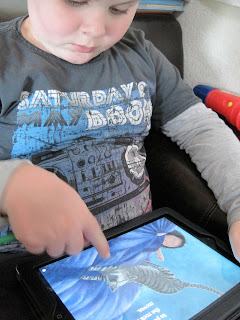 PicPocket Books has a whole suite of interactive book apps. Three we like are: 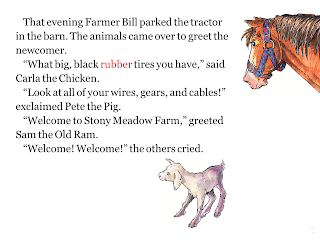 With PicPocket interactive books apps, the voiceover loads automatically, but the word in current play gets highlighted in red so pre- and early readers can keep up. A tap on the text replays it. I actually think varied book app voiceover functionality is a good thing, as it keeps Leo used to adapting, and prevents getting his book app expectations mired, set -- and then exploded when different comes along. 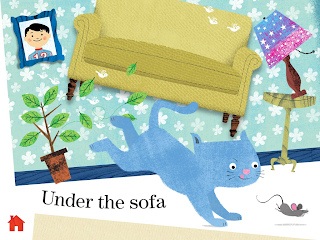 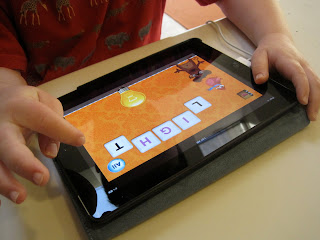 If you child is a fan of Duck Duck Moose's Wheels on the Bus and Itsy Bitsy Spider apps, they'll probably fall for Wagon Word Wagon ($1.99), too -- and get roped into a spelling app! While Word Wagon has some similarities to WordMagic and FirstWords, other spelling apps Leo likes, Word Wagon takes the drag-tiles-to-spell-words concept one step farther and applies phonics. Instead of the word being pronounced as a block when the tiles fall in place, each sound in the word is emphasized with a hop, as you can see in the picture. Cute interactivity with category selection and running on a conveyor belt to select spelling words objects makes Word Wagon fun even as your child learns. 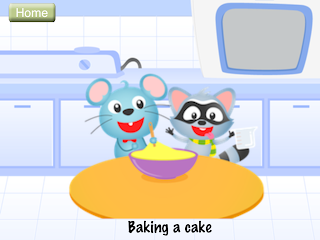 Leo and I enjoyed playing Speech with Milo: Sequencing ($2.99) together. This app presents three excerpts from an action sequence out of order, and requires users to order them properly. Though Leo can't read the text yet, I can -- and I told him what each excerpt was. He then got the sequencing right almost every time! This, like the other Speech With Milo apps Verbs, and Prepositions, is good for kids who need help developing their language skills rather than (or in addition to) their reading or communication. 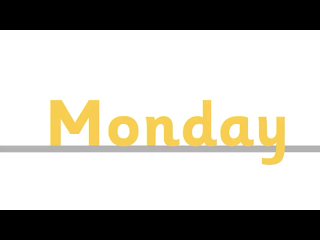 Mr. Thorne Does Phonics - Letters and Sounds ($7.99) is an excellent app for kids who are starting to read but need phonics help and repetition to cement those skills. Mr. Thorne has a clever and encouraging videos for each element in several categories -- including individual letter sounds, days of the week, and tricky words that don't look the way they sound. 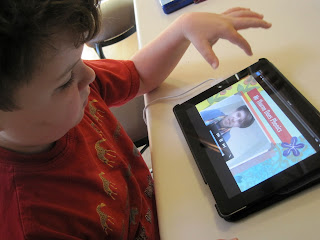 American English readers need to know that Mr. Thorne is British, and so are his spellings -- so  you might want comb & curate the videos first to avoid having your child accused of pretentiousness for using the spelling "colour." And Mr. Thorne's is not a small app -- at 711 MB it takes up a goodish amount of space, and is another example of why I recommend getting iPads with more storage rather than less, if possible. 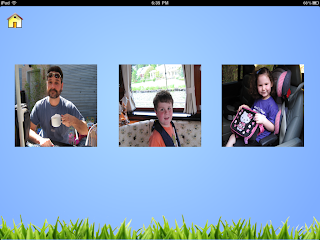 Now we're getting into some autism-specific apps. One we're incorporating into Leo's home program is Word SLaPps ($2.99). I've mentioned before that categorizing is an area in which Leo needs support. Labeling is, too. Word SLaPs makes a game out of both, but with your own content. I wish this app had been around when Leo was first starting his home program! It's awesome! (apologies to Robert Krulwich for using that word.)

With Word SLaPps, you can create your own category folders, and within each folder make a selection of picture icons with audio labels. When you play the app, it serves up a random choice of one, two, or three of the icons (depending on the level) within the category, and uses the audio label to prompt identification.

The screenshot to the left shows our Family category -- there are five of us, the app randomly shuffles up three, then says the name/label of one and Leo has to pick it. When he chooses the right icon, it disappears with an animated flourish, and there's cheering! This app makes me glad once again for having an iPad with a built-in camera. 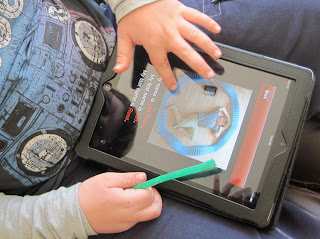 All About Me ($.99) is another straightforward app -- for several personal information categories, you import a picture, then fill in the text for that category, whether it's name, address, phone number, parents' names, etc.  If  you turn on the iPad's built in Accessibility: Voiceover option, then All About Me allows kids who can't yet read to "read" their personal information to themselves. And even though this app is geared to kids like Leo, it has broader appeal to parents of mildly neglected third kids like, for instance, six-year-old Mali, who need extra practice remembering information like, say, my phone number. 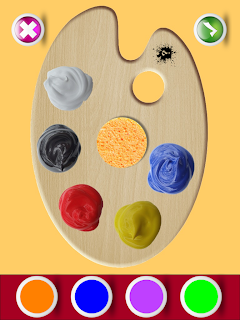 It's not easy to find art apps for Leo that are easy to use yet novel. Color Mix ($1.99) lets Leo dabble in color mixing through tapping and dragging -- skills he's got down. Then he gets to use his newly created color palette in free draw, on coloring book-style pages, or on a dot-to-dot. I especially appreciate that, in the latter two, Leo's coloring goes behind the line art/outlines rather than in front on them. 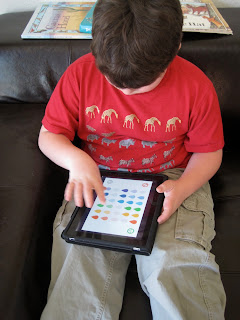 For free-form music play, Leo is currently favoring Dropophone* (free), an app recommended by BubblyGrl. It features a field of blank drop shapes. Each one has its own tone when clicked upon, and cycles in six-second increments. Depending on the order in which the drops are clicked, the composition will vary -- yet never becomes cacophonous. I am watching Leo closely, waiting to see if his drop selection begins to follow patterns. 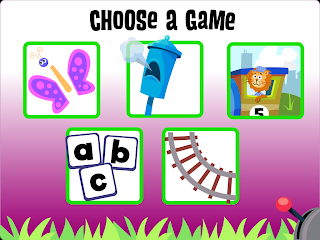 The developer of Zoo Train ($1.99) says she came up with this app based on her twin preschoolers' interests, but she might as well have tailored it to Leo's app enthusiams -- almost spookily so.

The interface is straightforward -- no narrative (yay), just a five-choice main activity menu. 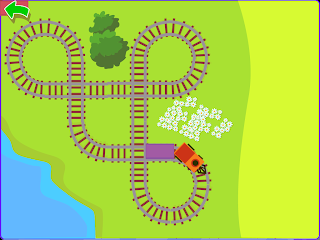 Reading is not necessary with Zoo Train, the graphics are cute not twee, there's lots of gentle audio encouragement, and, most importantly -- I didn't have to show Leo how to do a single one of the activities -- they were intuitive enough that he figured them out himself. I like this app a lot, but at only $1.99, I have to give Zoo Train a hearty recommendation. 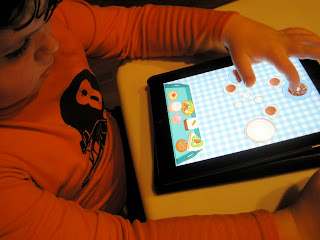 Toca Tea Party* ($2.99) This one's all about play -- set up a tea party, tap on all the noms to "consume" them, then wash the dishes. It doesn't seem like much, but my kids love this app -- Leo included (he showed me how to use it, if you must know). I especially like the tap-to-play radio on the tea party table, with its cheerful jazz tunes.

And -- a warning -- the startup sequence will get stuck in your head. I've started calling to my kids with a "Hey, Toca Boca!"

Our kids with autism don't always have to learn learn learn on their iPads. Like any other kids, they should get to play, too. Toca Tea Party suits the pure entertainment ticket nicely.

Though these apps were gifted to my kids except where *noted, the opinions expressed are my own. I only review apps we like and use.
at May 05, 2011