I had the best time ever at IMFAR 2011. Apparently people with autism and people who are related to or interested in people with autism are ... my people. Apparently I like nothing more than being freed from the tyranny of small talk while surrounded by unabashed, voluble enthusiasts. Though the frenetic information download pace of the conference itself had me cycling into euphoria then crashing from overwhelm several times each day, these folks made the experience more than worthwhile. (My IMFAR conference and session dispatches can be found at the Thinking Person's Guide to Autism.)

Alison Singer and the Autism Science Foundation provided the travel grant that allowed me to go to IMFAR in the first place, plus an extra-comfy ASF t-shirt that my husband openly covets. It was great to finally meet Alison in person, and staffers Jonathan Carter, Dawn Crawford, and Max Rolison were helpful and cheerful company. I'm additionally grateful to the ASF for facilitating the press pass that gave me leave to hide in the Press Room whenever IMFAR overload shut me down.

Due to a series of coincidences, Matt Carey was my mostly conference companion. He was kind, wry, and every bit as smart in person as he is online. Those who know him from his serious LBRB writings may be surprised to read that I had to beg him to stop making me laugh so much, as one of my sensory issues is a marked aversion to snorting food or liquids out of my nose.

Our ASF Travel Grant compatriot M. C. (Shidash) was also the kind of company I enjoy -- not just smart, not just enthusiastic, but with a marked sense of purpose and community. Plus an appreciation for cheesy toast and cool hats. And hermit crab rights. And service dogs. And app development.

Steve Silberman was the source of many intense, intense, rewarding conversations and ever so many great stories. He's really f***ng cool. I believe I still owe him a round of drinks.

Stephen Shore was only onsite for part of the conference, but radiated pure kindness. It was great fun to watch him tickle the digital ivories on Leo's iPad piano, and I do so wish we lived within driving range so he could help us suss out a way to tap into Leo's musical talents.

John Elder Robison is one of the most effusively inclusive people I've ever met, and was the catalyst behind many impromptu IMFAR social events. Conversations with him about the complexities of motivation, agenda, and community (and also about the Morganza spillway) were enlightening. Did you know his legs are twice as long as mine plus he has twice as much energy? I found this out when a group of us scoured downtown San Diego on a dinner quest.

Alex Plank is as charming as you might suspect from his WrongPlanet.net interview series with John Robison's son Jack. He also had the most deadpan sense of humor onsite. He and his WrongPlanet crew AJ and Noah plus Susan Levy (a force in her own right as well as a compelling conversationalist) were busy busy busy throughout the conference, shooting and editing IMFAR video highlights and interviews.

As I wrote on Thinking Person's Guide to Autism, I was pleased to witness Autism Speaks funding so much of the promising research presented at IMFAR. AS spokespersons Ali Dyer and Peter Bell made real efforts to reach out to stakeholders, which was appreciated.

I was also extremely grateful to my Thinking Person's Guide to Autism team members who couldn't come, for various reasons --  yet were present in spirit, via email, Twitter, text,  and phone. Jen Myers stayed on top of what became a rather frantic TPGA book cover design process -- it is so gorgeous, can't wait to show you all; Emily Willingham fielded my calls about approaching researchers who presented questionable poster material even though she was in the middle of moving; Liz Ditz monitored and reported on the five- or six-ply IMFAR information streams and tweeting topics I both did and did not get to; and Carol Greenburg propped me up and kept me going via email reassurances when that conference overwhelm spiraled from mildly amusing to legitimately distressing. 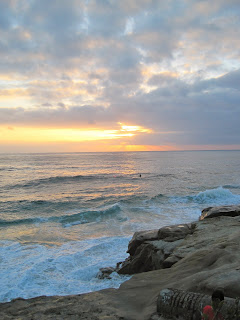 Final thanks to Seymour and the kids for the indulgence of five days away from home, and also to my mom for letting me stay with her during the conference. Not only was my mom the best company of all, but staying with her meant coming home to this view every night.