I recently came across three such apps: Go Go Kiddo, Alien Buddies, and Bugs and Buttons. These apps are chock-full of activities, not just dedicated to a single function (not that there's anything wrong with a dedicated app). Their design is professional, devoid of the "anyone with a good idea can do this" feel that characterized so many first-wave (though still useful) iPad apps. They're teaching your child stuff while said moppet is entertained (not that there's anything wrong with pure play). All three are meeting with resounding approval from both my just-eleven son with autism and his just-seven sister. And not a one costs more than $2.99.
Go Go Kiddo ($1.99) is a brand-new app from a team that has obviously invested much time observing the apps kids like to play, and using that information to create "Vitamin Fortified Fun." They did a great job; in fact I think every one of Go Go Kiddo's activities could be a stand alone app.

I was initially worried about Go Go Kiddo having a complicated main interface graphic, but I needn't have fretted. Each activity's icon has a representative graphic, and Leo is both a visual guy and an explorer, so once he learned which picture went with which icon, he was set. And Leo is a doer -- he wants to jump into the fun right away -- so even though I appreciated the demo mode that opens each activity, Leo appreciated being able to turn off the activity demos with a tap. 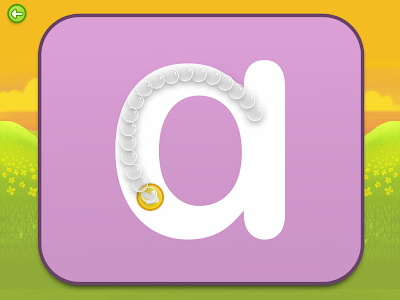 Then you use that letter's character to "pop" the bubbles confining the other letters needed to spell a word. Those familiar with similar launch games will be unsurprised that my kids find this game addictive. 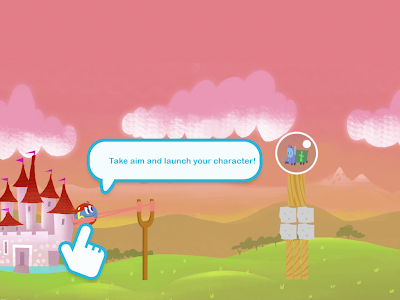 Leo is always, always going to be happy with a music activity like Go Go Kiddo's Creative Keys. Always. He's going to be extra-happy with a keyboard activity that uses several different sound functions (piano, violin, silly sounds, animal sounds), a teaching mode, and a recording option that sets the Go Go Kiddo characters dancing to his original compositions.

Another favorite Go Go Kiddo activity is Trace and Race, which helps learn to write, identify, and differentiate between numbers. And helped distract and soothe our boy when he was trapped in a restaurant booth at Disneyland while giant furry creatures roamed the place, seeking victims to hug. Leo was wily; he avoided eye contact and was not accosted once. 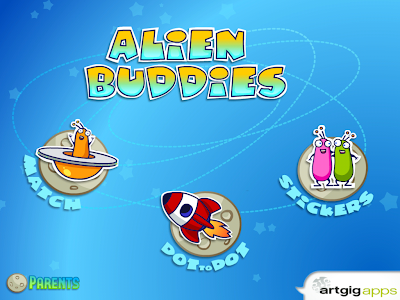 But each activity has many, many intra-activity choices and variations with both visual and written cues -- and then reading or listening options for each of those. Again, easy for Leo to navigate. Here is the Matching options screen: 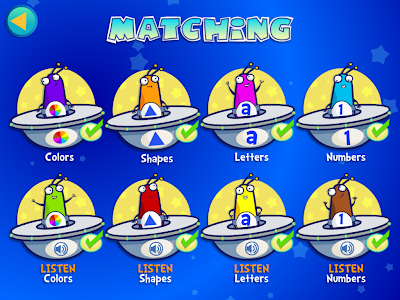 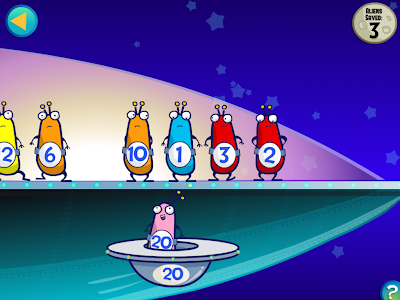 The Dot to Dot activity is cleanly designed, as you can see -- and Leo likes a solid, easy-to-follow dot to dot activity.  He is less a fan of the open-ended sticker activity, but that is where his little sister goes overboard. No activities go wasted in this house. 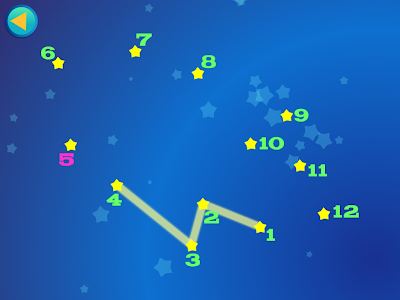 Bugs and Buttons ($2.99) deserves kudos for its variety and flexibility, and the thoughtfulness of every aspect of its design. This app has eighteen activities, and a Stamp Collection option. The Bugs in the word 'Bugs' below? They're interactive (that's what Leo is playing with in the top photo above). And the only app company I've known to take such care with its background music -- which in B&B's case ranges from classical to Klezmer -- is TocaBoca.

The one irksome feature is the initial interface (below) -- one has to be literate to access it properly, because there's no visual cue as to which word leads where. Not helpful for wee kids or pre-literate folk. But that's a small quibble, and it didn't take very visual Leo long to figure out that the "ex ---" word leads to three full pages of activities options. 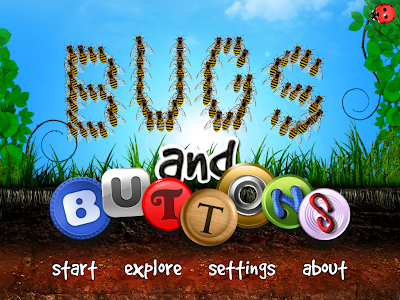 One of the three screens of activity choices. All the activities are lots, lots, lots of fun; every one we've tried so far has been appropriate for Leo: 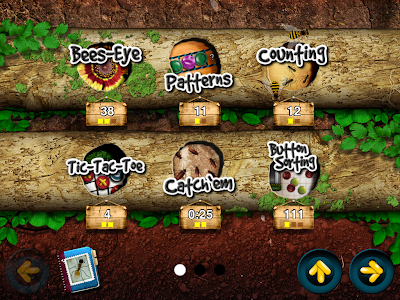 Button sorting: Matching. YEAH! This starts out easy and facilitated (see hand icon below) and gets harder with mastery - more buttons, more matching, more mastery opportunities. Leo's awesome at this activity, as you probably guessed. 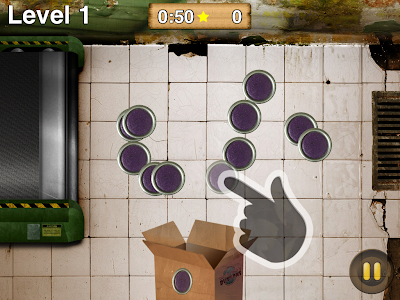 A similar, but not purely visual and so slightly more challenging (and IMHO so much more beautiful) Bugs and Buttons activity is Firefly Sky, which lets deprived West Coast kids like Leo who have never actually experienced fireflies play with them, and collect those that match the color word on the jar (so far the words have been congruent with respect to color, though it would be interesting to see how Leo would react if that wasn't the case, as he can read most color words). 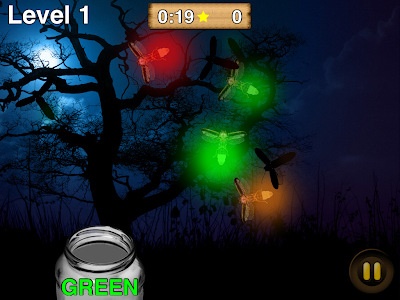 This app has so many options, I know Leo will be exploring it for a good long while -- which I'm glad about, as he tends to get into ruts with the apps he likes and play them over and over again. But when he finds a new app, a good app, a useful app and an app with so many exploration opportunities, he's got a mission, he's got something to do. And while I keep tabs on him to make sure he's using the app correctly and making the most of its options, with Bugs and Buttons -- heck, with all three of these apps -- I know he's going to be busy, engaged, and entertained for a good, happy long while.

----
*Disclosure: I was sent pre-release copies of Go Go Kiddo and Alien Buddies. I purchased Bugs and Buttons. But, as always, I only write about (and add to our apps spreadsheet) apps that impress me. All prices listed are accurate as of this post's timestamp.
at November 29, 2011