It's been two years since Leo started taking Risperdal to help manage his aggressive and self-injurious behavior. It works, for the most part. He no longer destroys furniture or terrorizes his sisters with his outbursts, nor does he injure himself or others. (He still has the occasional frustration-based outburst that, in hindsight, usually could have been prevented.) The drug doesn't make him any less alert or present. And it seems to stabilize his sleep patterns.

Unfortunately, putting our sweet, giggly boy on a black box antipsychotic has not helped another disruptive feature of his autism: repetitive and compulsive behaviors. Right now, Leo needs to stomp, spin, get repeatedly up and down from chairs or toilets, open and close doors, swallow air & burp it back up. He can't not engage in these behaviors. I realize that stimming can serve a legitimate function, or be a coping skill -- but in Leo's case the behaviors seem more compulsive than self-soothing, and are interfering with his ability to focus and learn both at home and at school.

Behavioral approaches have not worked, nor have blocking (how do you block a burp?) so we experimented with increasing his Risperdal dosage under the guidance of his autism/meds specialist doctor. The large dose didn't help his behaviors at all, and in fact seemed to bring out new ones like head rolling and arching, made existing compulsions more pronounced, stoked his already-ravenous appetite, and led to extreme enuresis. Not good. Not what we were aiming for.

So, we rolled Leo's Risperdal back to the very lowest dose -- the dose he'd started with in January 2009, and which we'd increased in the interim due to his being a growing boy. After a few weeks at that new dosage, we added a very low dose of the anti-anxiety med Zoloft, at half-dose for one week to see if he got hit with side effects. He didn't, so started giving him a full (but still extremely low) dose.

It's been three weeks, and I'm not really seeing any dramatic benefits, but Zoloft generally takes a month to kick in, so it's still early. And we have to be careful about perceiving meds-associated changes in a changeable boy who is constantly cycling and testing skills, as well as steadily growing and maturing (yet another reason why keeping a daily record is something I recommend -- data data data).

But here's what is different since Zoloft: mumbling, whispering, and ventriloquist-style talking through his teeth. He can be coaxed or prompted out of it, though. We are also seeing different language -- longer sentences, asking for songs and stories he's not asked for in years (have you ever tried to play The Lonely Goatherd on a pennywhistle? It's hard!), spontaneous declarations, associations (after singing Laurie Berkner's Goodnight, which refers to animals and the sounds they make but never associates them outright,  Leo listed all the animals in the song by the sound they made "Owl says 'hoo hoo,'" etc.)  He's experimenting with jumping with two feet at at time -- up stairs, in and out of the car. But, again, we're not sure if these changes are because of Zoloft. Might just be Leo rejecting stasis while embracing routine, as is his creed. 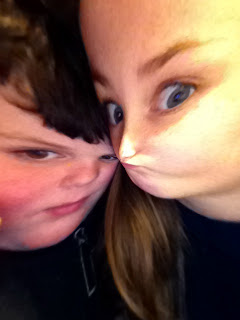 This semi-controlled med flailing is one of the hardest parts of Leo's kind of autism. He doesn't have a specific condition know to react to a specific meds, so we are stuck using trial-and-error, and damn have we had some errors. Overall, though, I believe we are headed in the right direction -- whether Zoloft is the right drug or not, I think his compulsions are rooted in anxiety.

And funky compulsions or no, Leo is in a good space at the moment. He is happy, he's affectionate, he loves hanging out with us, playing games, interacting, singing, hiking, goofing around with his new iPad 2 taking pictures of himself or with his sisters. It's spring and it's sunny and our annual Pool Opening is coming soon, he can just tell. He has much to be grateful for, as do we.

But Leo deserves more, he deserves ease, he deserves to be comfortable in his own skin. So we'll keep fiddling until we get his meds right. And wrestling with our own anxiety, all the while.
at May 02, 2011