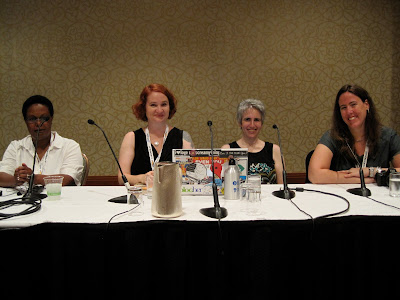 We were very cute. Even Pamela with that microphone in front of her face.
Have to say, folks -- autism and parenting are in the forefront at the moment, given that Leo is out of school and Seymour is in Philadelphia trying to figure out what the hell a Tastycake is. All this is getting in the way of BlogHer10 recordkeeping. If nothing else I'll slap up a big photo series tomorrow. Sheesh, this life we live!
Leo is back to stomping and twirling stims again -- but he is also in one of the calmest periods I've yet seen. He ate regular meals in restaurants two days in a row. PB&J and french fries may not seem like a victory to some, but until yesterday Leo only liked homemade PB&J, and Burger King french fries. So wooo! He also accepted my not buying him a mini-baguette at the grocery store with calm resignation rather than a banshee tantrum. First time ever. Round up the cannons for a proper salute!
Leo is also the cover boy for the SF Weekly today, for a story about him and his iPad -- really about autism and iPads in general. (This is the secret project I mentioned a few times recently.) Supposedly the story is in the LA Weekly and the Seattle Weekly, as well as the St. Louis equivalent -- can anyone confirm?
I miss Jennyalice, out on her intrepid cross-country trip.
Miss Seymour. Though he probably forgot about me as soon as he had his first bite of cheesesteak.
at August 11, 2010