BlogHer10 Friday: Autism Panel and Beyond!

BlogHer10 wasn't quite the same without several members of our tribe: Gwendomama, Vicki, Christa, TC, and Mir, who sighed when tickets went on sale; Lindsey, who only started blogging weeks ago; Liz, Emily, Elise, and Sandy, who bought tickets but had to reverse course; and Susan and Sharon, who were thwarted by the Fates at the very last moment. You were spoken of, with regret and fondness, throughout the weekend. Sarah Dopp and SJ too -- I've never been to a BlogHer without SJ, damn it all.
---
BAM! There's nothing quite like sleeping through one's alarm on a really important day -- especially when you're the one responsible for the alarm. Jennyalice and I woke in instant panic far too close to the start of the BlogHer autism panel -- which I was moderating. Since we have superpowers, we made it with time to spare -- but the pace of the day or indeed the weekend never slowed, not for moment, once our feet untangled from our (respective) sheets and hit the ground. It was fabulous! Here's my take on Friday/Day One, with lots and lots of pictures.
---
The Autism panel [liveblog here, podcast coming in about two weeks] was a thrill, an honor, a celebration of our testimonials, togetherness, and truths. And my co-panelist Jean Winegardner/Stimey already wrote it up! Twice! Here's my favorite quote:

"Of course I think the words that we spoke and the comments from the audience were important—very much so. Even more important, however, was the powerful experience of sitting in a supportive room with a group of people who care about people with autism and want the best for them. When you're in a room like that, you don't have to explain, you don't have to justify, you don't have to be defensive. You just have to be. And you can be because the other people in the room get it, they really, really get it."

She's so right. As Molly wrote, "I knew I was in the right place at BlogHer when [yours truly] shared that Leo took a bite of cheese pizza and the entire room applauded."
Our co-panelist Pamela Meritt/Shark Fu of Angry Black Bitch (she is the co-guardian of her brother, who is an adult with autism and aphasia) blogged the panel as well:

"...Because of the work of parent’s and advocates like my mother, finding resources and educational opportunities for folks with autism isn’t as hard as it used to be ... we’ve got a long way to go, but we have come a long way already.  I’ll admit that my image of parenting a child with autism is greatly influenced by the challenges that I witnessed growing up.  That image is changing now that I’ve met parents like those who attended the panel and learned that parenting experiences and options are as diverse as the lives of people with autism."

So here we are, the three panelists: Pamela, me, and Jean. Where was Sharon DaVanport, from Autism Women's Network and our fourth panelist, you ask? Unfortunately, she had a medical emergency the night before BlogHer, and had to drop out -- we were all so worried for her (she's going to be fine), and sad for our panel's missing piece. Sharon and I tried to arrange for Carol Greenburg, a local autism advocate and parent who herself has an Asperger's diagnosis, to take her place -- but my Friday was spend mostly offline exploring several circles of travel hell, and the early Friday morning internet connection was recalcitrant -- so I arrived at the panel thinking that we'd remain a trio. 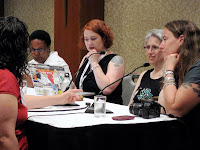 Silly me, for not placing complete faith in BlogHer's Jes (red shirt): speaker wrangler, conference programming manager, and, apparently a sorceress. She made Carol apparate, moments before the panel was to start. 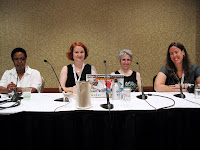 And then we were four. (Carol was an ideal speaker, and, really, should have her own stand-up act; it was a privilege and so much fun to hang out with her during the rest of the weekend.)
And then more magic happened: Positivity and community were made manifest. We did shatter several autism myths, we did hear and recognize others' challenges and pain and victories and voices, we did learn from each other, we were lifted -- as I commented to Stimey, I considered it an emotional Lourdes. Amalah contributed to the catharsis onsite, and, afterwards, online:

"There is joy and happiness and laughter in our homes, just like in yours. We have dreams and so does he. We go out for pizza and play on playgrounds and drag our children on boring errands for back-to-school clothes. We bribe and scold and lose our temper and make mistakes and start over the next morning. My son is "lucky" because his father buys him eleventy hundred Star Wars toys every month, and because sometimes I make a pan of chocolate brownies before dinner, and because we live in an area with well-funded, progressive early intervention and special needs programs ... not because the stars aligned and blessed him with two perfect, sainted parents who are uniquely suited to drive him to occupational therapy." 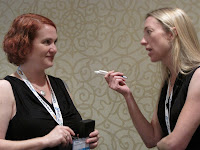 We could definitely continued the conversation for another hour or two (look at Julie, and me, post-panel-chatting; no suprise that she is intense and wonderful, as those seemed to be attendee requirements), but BlogHer had a schedule to keep. I think we covered much of what we wanted to cover, but if we missed anything big, say so in the comments -- we can continue the discussion there.

Being bounced from the panel venue didn't mean we had to part ways. Ellen from Love That Max set up a Birds of a Feather lunch for the extended special needs community directly after the panel -- and it quickly became the hottest and best-attended table in the BoF room. Witness!

Also witness a very happy moment: Jen and me with the inimitable and instantly likable Ellen.
We were surrounded by so many other real live women from inside the computer -- I was so thrilled to spend time with ass-kickers like  Jorja, Carmen, Juliette, Varda, Janis, Julia, KAL, and  Melissa ... the latter is a bookworm extraordinaire who floored me by bringing copies of both Can I Sit With You? books for Jen and me to sign! That she had bought at the onsite BlogHer bookstore (thank you Melissa)!

See? Our books! Plus My Baby Rides the Short Bus in the upper left corner.
We went to Liz Henry's fun Geek Lab presentation on not getting hacked. Where we sat behind Skye as she ever so charmingly alternated between muttering corrections to herself and raising her hand -- she was with her people, and we were happy to be counted among them (she is one of our teammates at work), Where Liz told everyone how Iz had shoulder surfed my iTunes password. And that I then changed it to "fu_isob3l." THANK YOU LIZ. But seriously, people, change your password every six months! 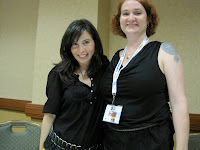 Then we hung out with one of my kids' heroes: Ashley from The Jimmies! Who does about 5,000 things -- she's the voice of Nickelodeon, makes Twitter handle jewelry at Survival of the Hippest, has her own band, and personifies awesomeness -- as you'll see in my BlogHer interview with her later this week.

Between Ashley and the evening there was some questionable behavior, for instance going to the swag pavilions and nomming on breakfast "corndogs" that were actually breakfast links wrapped in pancake batter. Soooo bad, sooo good.
And then it was time for dinner at a tiny, scumptiousness-filled restaurant in the West Village with people who rock so much that even I, superlative abuser, can't properly capsulize the awesome -- though I can bow down to Kristen and Jen for making the dinner happen. (I'm not featuring/mentioning a couple of folks as they may not want to be publicly associated with us.) 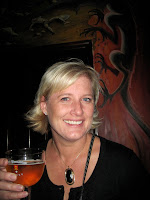 We all parted ways after dinner, some of us to consult psychics (which I didn't need to do, having consulted one merely a week before). So I dragged Jen to my favorite East Village bar, Burp Castle. She likes Belgian ale, I figured, she'll like Burp Castle. And she did. She even listened while I got a bit weepy over never having been there without Seymour, not ever. Jen is so rad. And gorgeous. And tall. And blonde. 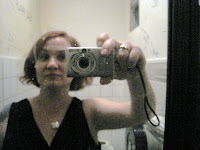 Last shot of the evening, before we took a cab home and I collapsed over my laptop in the middle of a work shift -- shocker. This is a Burp Castle bathroom self-portrait. I have to fish out my 1994 shot of the same.

BlogHer: Saturday, which was equally eventful, documented soon. But can you understand why we were tired, all weekend long? I'm still tired, really. *yawn*
at August 16, 2010