Johnny Depp Gossip: One of Many Cherries Atop a Bountifully Busy Week

Here are six things I learned during this past weekend's bachelorette road trip/retreat for Leelo's godmother Hayley:
The week before the bachelorette fete was packed. Some visuals: 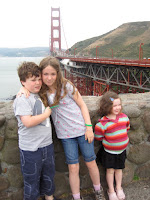 Golden Gate Bridgin' it. The girls had a contest to see how many "San Francisco" sweatshirts they could spot, given that tourists don't expect cold and foggy summers. 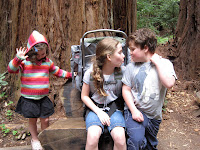 Hiking in Armstrong Redwoods outside Guerneville. Leo loves running along theses trails almost as much as he loves his big sister. Iz is wearing her backpack to prep for her current excursion: a week-long high Sierras trails camp. We brought along Leelo's iPad and used the visual schedule to assure him that we would indeed go have ice cream right after the hike. 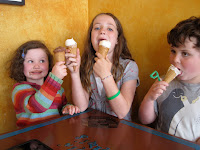 Which we did! (After this we barreled back to San Francisco for the final meeting of our big secret project which I should be able to tell you about in a week or so.) 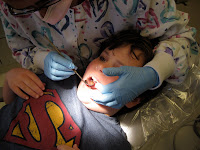 Leo let his dentist fully examine and clean his teeth! First time ever! And oh yes, this image will be part of his "Going to the Dentist" social story on his iPad. 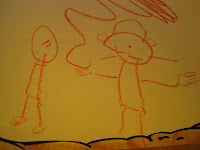 He figured out how to draw bodies! Another first. I especially like the one on the right; you can see that he started to draw arms coming out of the head, then corrected  himself and drew the arms attached to the torso. This is one of those milestones that evaluators look for, by the way, so this is concrete evidence of Leo continuing to develop and learn. (Notice also the carefully drawn fingers.) 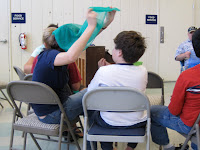 Leo spent two days visiting his new school. He loved it and didn't want to leave. This is during music class.

And, he went to camp again. With his friend Jake and many of his other local buddies. The staff was diligent about sending pictures home via Facebook, so we got to see just how much fun Leo was having, all weekend long (while Iz was backpacking, I was bacheloretting, and Seymour and Mali had a delightful daddy-daughter weekend).
One item I didn't get a picture of but that blew me off my feet and into the clouds: Leo is now eating cheese pizza. This from a boy who has almost every Problem Eater characteristic the inimitable Judy McCrary Koeppen listed in her recent Thinking Person's Guide to Autism post on Autism, Feeding Issues, and Picky Eaters. That voluntary cheese pizza consumption is also proof that Judy knows what the hell she's talking about -- she is Leo's SLP, and has been working with him on feeding for years. It's because of her that we've been gradually, practically in millimeter increments, increasing the amount of cheese/sauce area (yucky) attached to the pizza crust (yum, it's bread, what's not to like) that he will eat. Hope! Springing!

Freaking a bit about leaving for BlogHer tonight but I'll not dwell and instead will leave you with some link self-love (recent posts I've written for sites other than this one):
¡Vamanos al Manzana Grande!
at August 04, 2010