We Live So Fast

I called my mom last night to see how she and Iz are faring at my brother's condo in Palm Springs, since Iz has never before experienced a desert in the summer. While we chatted, my brother yelled from the background "Ask her how New York was!"
New York? Dude, that was last week. I swear I'll get to it, but it already feels like the tucked-away past, given how many events have tumbled down around us between then and now. During Seymour's and Jennyalice's and Ep's absences, specifically (though I was grateful for Twin Liz power: Henry & Ditz). Let me tell you about some of last week's goodness.
Leelo, Mali, and I spent Friday afternoon cruising San Francisco for Leo's stunning SF Weekly cover. One of the benefits of being a rather unobservant person is that it is really easy to please me by pointing out that which is obvious to most everyone else. For instance, that SF Weekly covers are displayed in kiosks all over the city! Do you know how weird it is to see pictures of your kid all over town?
Here is Leo, with himself and a bunch of stickers, in Hayes Valley.

We also saw him on Union street! 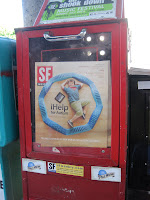 Hayes Valley is so very much one of our SF comfort zones. If all fails, we can always hit Frjtz or Blue Bottle. Leelo and Mali love the Octavia street playground, and I -- selfishly -- love that there aren't too many little kids around. Leo can relax and explore. 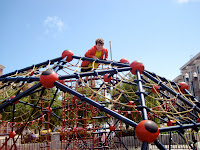 Mali can make friends with all the local dogs. 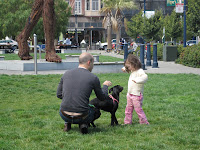 And then we can go lounge at Isotope Comics. Which is actually what customers are encouraged to do -- there are big orange squooshy couches. But we've never been able to hang out before, not with Leo along; comic book stores aren't his thing. But now, with his iPad at the ready? We sat. We read. We chatted. He played. He was happy. He was content. Another near-miracle, I'm telling you.
But I wasn't so far gone into the happy trance as to go on a comics spree -- I bought only two: Evil and Malice Save the World (recommended by Ben, a fellow lounging customer), and Buffy 8 Volume 4. Even though the very knowledgeable and charming owner made several recommendations. I took a picture instead! Feel free to get my kids any of these books, heh: 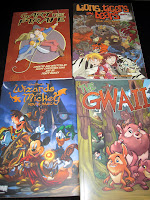 And then we hustled home and then there was a babysitter miscommunication so they didn't show but then Seymour returned from Philly so it was okay but I was so exhausted that I fell asleep on top of my computer and didn't stir until 4 AM. If anyone got a late-Friday tweet or email from me consisting of ZZZZZZZZZZZZ without end, that's why.
I'm so glad Seymour is home. As are Leelo and Mali. Now we just need to go down to San Diego and retrieve Iz. Between her camps and her parents' travels, I don't believe the five of us have inhabited the same space for more than 24 hours since mid-July. Here's a rare sighting of our girl (Mali's ongoing wall art experiment in background, this time in Wiki Stix). 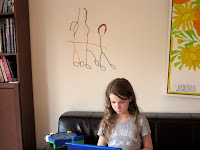 I miss her. And Jennyalice. And Ep. And I just wish everything wasn't so damn hard for so many people that we love.
Like my friends Susan and Godfather Michael, my companions on yesterday's frantic bridesmaid dress quest (the wedding? In one week). They'd had challenging weeks themselves, and so were along to help this shopaphobe locate and dispatch the ideal frock as quickly as possible, so we could then reward ourselves with conversation and stiff drinks at The Rotunda. (We were successful, thanks to Susan's laser-beam style instincts.) I really appreciated the downtime and company afterward, not to mention the excellent popovers, basil gimlet, and lobster rolls that were Susan's treat, at her insistence (thank you!).
Seymour and I had babysitting success later last night, and bolted for a local coupon-friendly restaurant. I haven't sat down for a conversation with my partner for just about ever. It was delightful, he is delightful, I am starkly aware of my good fortune. Our evening ended with me in peals of laughter once again thanks to my lack of guile -- after telling Seymour how impressed I was with the The Rotunda bartender's liberal hand, he chuckled and informed me that, as The Rotunda is nestled on the top floor of a department store, getting customers soused is likely policy, in the fashion of free casino floor drinks in Las Vegas. Well, duh.
Off to pack for San Diego. Though I should probably unpack from Santa Barbara and New York first.
Anyone else living in a vortex? Good or bad, or -- like me -- an intense combo?
at August 15, 2010