In which I review Paula Spencer's Momfidence! for this week's Mother Talk Blog Book Tour. 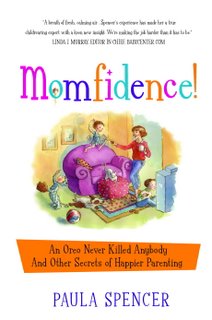 Paula Spencer, the author of Momfidence!, must have balls of steel. It would take no less to write and publish her free-spirited take on the mercurial subject of parenting in this judgmental age. I admire anyone who cheerfully and wittily reports that she regularly supplies her kids with Cheetos and Oreos (and that they're perfectly healthy), and who advocates judicious hollering at kids in public--for instance, when they disregard more level requests to stop jumping on a rotting whale carcass. Ms. Spencer's years in the parenthood trenches have given her war stories aplenty, and she deserves new enlistees' attention so that they won't have to learn everything the hard way, like she (and I) did.

I wish to my very marrow that I'd been given a book like Momfidence! before my husband and I spawned. In fact, I wish that Ms. Spencer had come to my house, sat at my kitchen table as I frantically tried to write thank-you notes between every-two-hours pumping and nursing and cleaning pumping equipment for our non-latching newborn, and told me to calm the fuck down. To worry about the note-writing later. To cut myself and my partner some slack, and to focus on the only two things that were critical: my own basic needs, and those of my newborn.

She would have told me to try to relax, and to have faith in myself. She would have advised me that reading too many parenting books and listening to too many parenting opinions is the fastest way to send a mom straight to Crazy Town--along with her kids. She would have advised me to winnow out non-critical family stressors, make do with whatever is left, and then have the confidence to stand by my subsequent parenting choices. Like letting my kids watch TV, with reasonable limits. Like not worrying about changing a newborn's clothes if they are spit-up spotted but still wearable. Like understanding that too much sugar is less of a concern than not enough protein. Like declaring that parenting can actually be fun.

Momfidence! is a well-written and worthy book, but it needs to be approached with a certain light-heartedness. It is not an set of instructions to be memorized, but rather an experienced mom's frank take on what has worked for her, and why. It never claims to be a book about serious parenting challenges--one look at the breezy cartoon cover should dissuade readers from consulting Momfidence! about anything other than everyday family issues. Keep this in mind when you read the book, or you may end up with some seriously twisted panties.

My own hackles raised when Ms. Spencer's opinions fell under what I call the Real Simple syndrome--mistaking convenience for simplicity and in so doing negating social responsibility. This wouldn't be a problem if freaked out new parents weren't made entirely of waffle batter and weren't desperately clawing at people like Ms. Spencer for guidance--but they are, and in certain cases I wish she had been more sensitive to her power to shape their outlooks. Ideally, instead of ridiculing people who choose organic goods as silly and spend-thrifty, Ms. Spencer could have stated that such things just aren't a priority for her family.

I also wish she hadn’t used a book about two-dad families as an example of things more worrisome than school sugar restrictions (seriously uncool), and that she hadn’t scoffed at early intervention for sensory needs. I am glad that she and her fortunate family remain unaffected by sensory issues, but it is callous of her to make light of them.

Despite my quibbles, Momfidence! is an entertaining, informative, and reassuring read for anyone about to jump--or recently pushed--into the parenting pool. I write so freely and not merely because the book's plentiful and wonderful advice is often in line with my own grizzled veteran's take. Though, unlike me, Ms. Spencer gets her points across without accosting random parents of newborns and begging them to go see movies with their baby while the little darling still takes extended naps. I should probably start slipping her book in their diaper bags at the same time.